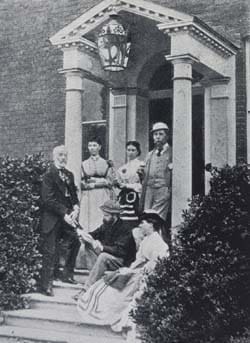 Gads Hill Place in Higham, Kent (sometimes spelt Gadshill Place and Gad’s Hill Place) was the country home of Charles Dickens, and where he spent the last years of his life.

The house was built in 1780 for a former Mayor of Rochester, Thomas Stephens, opposite the present Sir John Falstaff Public House.

Today the building is the independent Gad’s Hill School.

Charles Dickens first saw the mansion at  Gad’s Hill when he was 9 years old in 1821, when his father John Dickens told Charles that if he worked hard enough, one day he would own it or just such a house. As a boy, Charles Dickens would often walk from his home in  Chatham to Gads Hill Place as he wished to see it again.

Dickens was later to write, ” I used to look at it as a wonderful Mansion (which God knows it is not) when I was a very odd little child with the first faint shadows of all my books in my head – I suppose.”

Thirty-five years later, after Dickens had risen to fame and wealth, he discovered that the house was for sale and bought it for £1790 in March 1856 from fellow writer Eliza Lynn (later known as novelist Mrs. Eliza Lynn Linton). Initially Dickens bought the house as an investment, intending to let it, but changed his mind and used it instead as a country retreat, moving into the house in June 1857.

Dickens had bookshelves installed in his study at Gads Hill Place, some of which contained dummy books the titles of which he invented to reflect his own prejudices and opinions, including Hansard’s Guide to Refreshing Sleep, History of a Short Chancery Suit in twenty-one volumes, Socrates on Wedlock, King Henry the Eighth’s Evidences of Christianity, and the series The Wisdom of Our Ancestors: I Ignorance, II Superstition, III The Block, IV The Stake, V The Rack, VI Dirt, and VII Disease. Alongside these was placed a very narrow dummy volume entitled The Virtues of Our Ancestors.

In 1864 Charles Fechter gave Dickens a prefabricated two-storey Swiss chalet as a Christmas present. Dickens had it assembled on land he owned on the opposite side of the Rochester High Road. Later, he had a brick-lined tunnel dug between the house’s front lawn and the chalet. During the Spring and Summer months Dickens worked on many of his later works in his study on the top floor of this Swiss chalet, including A Tale of Two Cities, Great Expectations, Our Mutual Friend and the unfinished The Mystery of Edwin Drood.

The chalet has been preserved and was moved to the ‘Dickens Centre’ in Rochester High Street, Rochester, as a memorial to the writer.

The house remained Dickens’s country home until his death in 1870, when he died from a stroke on a couch in the dining room of the house. Many of the contents of the house were auctioned after his death.

Gads Hill Place was bought by Charles Dickens, Jr. after his father’s death, but he was forced to give it up in 1879 because of his own ill-health. The house was bought in 1890 by the Hon. Francis Law Latham, the then Advocate-General of Bombay.

In 1924 the house became Gad’s Hill School, which it remains today.

[box type=”info” style=”rounded”]Gads Hill Place was listed in 1952 and is currently recorded as a Grade I building by English Heritage (list entry: 1049037).

Click here to view the Wikipedia entry for Gads Hill.