The Victorian author Charles Dickens visited Newcastle, the most populous city in the north-east of England, on at least three occasions, in 1858, 1861 and 1867. All were for reading tours. We have compiled the schedule for each of these visits based on historic newspaper adverts, reports and reviews of the reading performances.

Dickens itinerary was as follows: 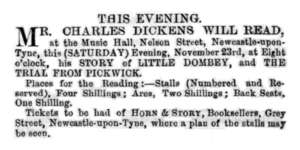 Advertisement for the final night of Charles Dickens 1861 readings in Newcastle. Published in the Newcastle Guardian and Tyne Mercury, 23 November 1861.

In late November, 1861, Charles Dickens returned to Newcastle and gave three nights of readings at the city’s Music Hall in Nelson Street. In a report of the visit, local newspaper Newcastle Guardian and Tyne Mercury commented on Charles Dickens qualities as a speaker, writing “Mr. Dickens possesses dramatic ability of high order; throughout he completely identifies himself with the characters he assumes, and equally master of humour and pathos”.

Dickens itinerary during the 1861 visit to Newcastle was as follows:

In March, 1867, Charles Dickens returned to Newcastle to give two evening reading performances again at the city’s Music Hall in Nelson Street. On both nights the performances were sold out.

Dickens itinerary during the 1867 visit to Newcastle was as follows:

The Town Hall, where Dickens spoke in 1858, was then the newly opened meeting place of Newcastle Town Council, located in St. Nicholas Square (between the Bigg Market and the Cloth Market). The building, was designed by John Johnstone in an Italian Neoclassical style. By the middle of the 20th century the Town Hall had deteriorated to such an extent that the Council was forced to relocate, the building being demolished in 1973. The site is now occupied by a modern office building known as No. 1 Cathedral Square.

The Music Hall in Nelson Street, where Dickens spoke in 1861 and in 1867, was first opened in 1838, with the hall situated upstairs on the first floor. It was renamed the New Tyne Concert Hall in 1879, and again five years later as the Gaiety Music Hall. From 1911 – 1949 the hall was used as a cinema. The building was demolished in the 1950’s although the facade was retained.