The King’s Bench Prison, in Southwark, was a prison from medieval times until its closure in 1880. It took its name from the King’s Bench court of law in which cases of defamation, bankruptcy and other misdemeanours were heard; as such, the prison was often used as a debtor’s prison until the practice was abolished in the 1860s. In 1842, it was renamed the Queen’s Bench Prison, following the accession of Queen Victoria to the throne, and later became the Southwark Convict Prison. 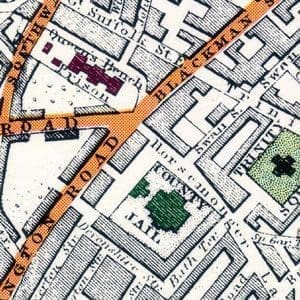 An extract from a 1843 map of London showing the County Jail (Horsemonger Lane Gaol) and Kings Bench Prison (having recently being renamed the Queens Bench Prison).

Charles Dickens lived close by early on in his life in Lant Street, whilst his father was imprisoned in the Marshalsea debtors prison.

Dickens used the prison in at least three of his novels. In David Copperfield, Mr Micawber is imprisoned for debt in the King’s Bench Prison. Madeline Bray and her father lived within the ‘Rules’ (permitted areas) of the King’s Bench in Nicholas Nickleby, while the prison is also discussed by Mr. Rugg and Arthur Clennam in Little Dorrit.

In Dickens time, the Kings Prison was located in an area of Southwark where there stood at least three prisons, including Horsemonger Lane Gaol and the Marshalsea debtors prison all nearby. The other two prisons also featured in Dickens works.

In 1842, the prison was renamed the Queen’s Bench and began taking debtors from the Marshalsea and Fleet Prisons and sending lunatics to Bedlam. Fees and the benefits they could buy were abolished, and soon after it passed into the hands of the Home Office during the 1870s, it was closed and demolished.

No longer standing, the Kings Bench Prison was located close to Borough High Street, Southwark. A housing estate now stands on the land.

Click here to view the Wikipedia entry for the King’s Bench Prison.

Our A Tale of Two Cities Pages.