Jacob’s Island was a notorious rookery (or thieves den) in Bermondsey, south east London and one of a number of slums in Victorian times in the capital. The area was made infamous by the Victorian author Charles Dickens in his novel Oliver Twist.

Jacob’s Island was located in Bermondsey, on the south bank of the River Thames in south east London. It was separated from Shad Thames to the west by St Saviour’s Dock, the point where the subterranean River Neckinger enters the Thames, and on the other two sides by tidal ditches, one just west of George Row and the other just north of London Street (now Wolseley Street). 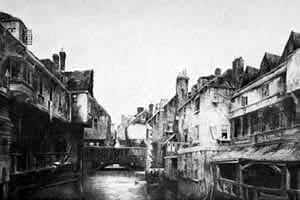 Jacob’s Island was immortalised by Charles Dickens in his 1837 novel Oliver Twist, in which the principal villain Bill Sikes meets a nasty end in the mud of ‘Folly Ditch’. In Chapter 50 of the novel, Dickens provides a vivid description of what it was like:

Crazy wooden galleries common to the backs of half a dozen houses, with holes from which to look upon the slime beneath; windows, broken and patched, with poles thrust out, on which to dry the linen that is never there; rooms so small, so filthy, so confined, that the air would seem to be too tainted even for the dirt and squalor which they shelter; wooden chambers thrusting themselves out above the mud and threatening to fall into it – as some have done; dirt-besmeared walls and decaying foundations, every repulsive lineament of poverty, every loathsome indication of filth, rot, and garbage: all these ornament the banks of Folly Ditch.

In 1849, the area was featured in an article in The Morning Chronicle with Jacob’s Island described as “The very capital of cholera” and “The Venice of drains”. The writer Charles Kingsley was said to have been inspired by the article into visitnng the area. In Charles Kingsley’s 1850 novel Alton Locke, the title character visits Jacob’s Island and sees the death of the drunken Jimmy Downes, who’s been reduced to poverty, and the bodies of his family, taken by Typhus. Kingsley is said to have later helped purchasing water-carts that were sent to Jacob’s Island to supply clean drinking water.

In 1934, a new public housing development called the Dickens Estate was opened in the area with houses were named after Dickens’ characters.

Jacob’s Island slum was in Bermondsey, on the south bank of the River Thames in London. All traces of the former slum area have long gone. The area was extensively bombed during the Second World War and the area today was largely redeveloped in the 1980’s and subsequently into luxury Dockland flats and apartments.

Click here to view the Wikipedia entry for Jacob’s Island.

1865 Death of the Italian poet and scholar Samuel David Luzzatto (born in 1800).
1836 A second volume of the first series of Sketches by Boz is published by the publisher John Macrone. The first volume had been published six months earlier.