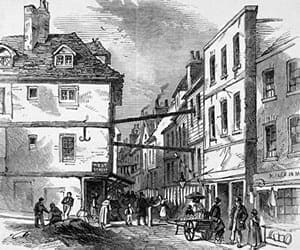 Illustration of Field Lane, dating from the 1840s.

Field Lane was an area at the southern extension of Saffron Hill, a notorious London slum and rookery in Victorian times, located between Holborn and Clerkenwell.

Charles Dickens used the location as a setting for the den of Fagin and his thieves in his 1837 novel Oliver Twist.

In 1841, Andrew Provan, a London City Missioner, came to the area to teach the children and young people the Christian gospel, establishing a ‘ragged school’. This became known as the Field Lane Ragged School.

Charles Dickens began his association with the Field Lane Ragged School in 1843 when he visited at the request of philanthropist Angela Burdett-Coutts (who he also worked with founding Urania Cottage).

In 1846, Dickens wrote a letter to The Daily News about the work of the school.

They who are too ragged, wretched, filthy, and forlorn, to enter any other place: who could gain admission into no charity school, and who would be driven from any church door; are invited to come in here, and find some people not depraved, willing to teach them something, and show them some sympathy, and stretch a hand out, which is not the iron hand of Law, for their correction.

Dickens’s visits to the school and area are said to be the inspiration behind writing A Christmas Carol. He kept in touch and donated a trough and some money ‘so the boys may wash and for a supervisor’.

In 1852, Dickens wrote about the school and his experience there in Household Words in an article entitled A Sleep To Startle Us.

I was first attracted to the subject, and indeed was first made conscious of their existence, about two years ago, or more, by seeing an advertisement in the papers dated from West Street, Saffron Hill, stating “That a room had been opened and supported in that wretched neighbourhood for upwards of twelve months, where religious instruction had been imparted to the poor”, and explaining in a few words what was meant by Ragged Schools as a generic term, including, then, four or five similar places of instruction. I wrote to the masters of this particular school to make some further inquiries, and went myself soon afterwards.

The charitable work first undertaken by Andrew Provan in 1841 remains today, run by the charity now named after the area where its roots began.

Field Lane and its ragged school have long since gone, swept away by the redevelopment of Farringdon Road.

Further Reading on The Circumlocution Office.

[box type=”info” size=”medium” style=”rounded” border=”full”]Click here to read the letter Charles Dickens wrote to The Daily News in 1846 about the work of the Ragged School on Field Lane.

Click here to read A Sleep To Startle Us, an article Dickens wrote in 1852 about the Field Lane Ragged School.

Click here to visit the site of the Field Lane charity.