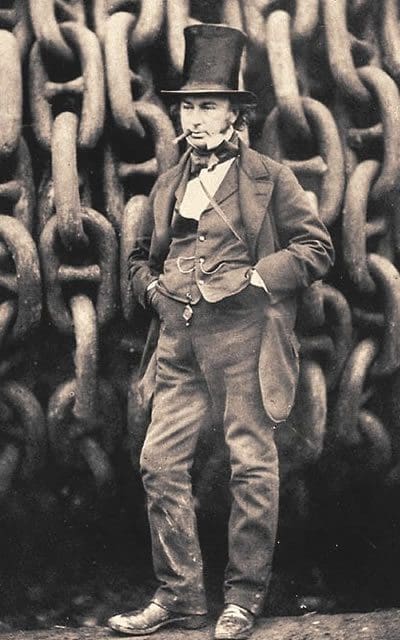 Isambard Kingdom Brunel, photographed against the launching chains of the Great Eastern at Millwall in 1857.

Isambard Kingdom Brunel (1806 – 1859), was a mechanical and civil engineer who epitomised the engineering advances and achievements of the Victorian era.

He built dockyards, the Great Western Railway, a series of steamships including the first propeller-driven transatlantic steamship and numerous important bridges and tunnels. His designs revolutionised public transport and modern engineering.

Brunel is probably best remembered for his construction of a network of tunnels, bridges and viaducts for the Great Western Railway, the line that built to link London to Bristol.. In 1833, he was appointed their chief engineer.

Impressive achievements during its construction included the viaducts at Hanwell and Chippenham, the Maidenhead Bridge, the Box Tunnel and Bristol Temple Meads Station. Brunel is noted for introducing the broad gauge in place of the standard gauge on this line. While working on the line from Swindon to Gloucester and South Wales he devised the combination of tubular, suspension and truss bridge to cross the Wye at Chepstow. This design was further improved in his famous bridge over the Tamar at Saltash near Plymouth.

As well as bridges, tunnels and railways, Isambard Kingdom Brunel was responsible for the design of several famous ships and docks.