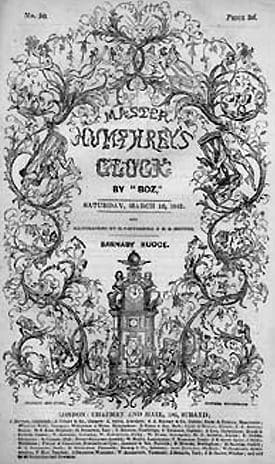 Cover of an 1840 serial of Master Humphrey’s Clock.

Master Humphrey’s Clock was a weekly periodical edited and written entirely by Charles Dickens and published from April 4, 1840 to December 4, 1841. It began with a frame story in which Master Humphrey tells about himself and his small circle of friends (which includes Mr. Pickwick), and their penchant for telling stories.

Several short stories were included, followed by the novels The Old Curiosity Shop and Barnaby Rudge.

Our A Tale of Two Cities Pages.