Clarkson Frederick Stanfield (1793 – 1867) was a prominent marine painter and friend of Charles Dickens who worked with him on creating scenery for plays and illustrations for his works.

Born in Sunderland, Stanfield was the son of James Field Stanfield (1749–1824), an Irish anti-slavery writer, actor and former seaman. He was named after Revd Thomas Clarkson, the slave trade abolitionist, whom his father had campaigned with.

Stanfield probably inherited artistic talent from his mother, who is said to have been an artist but died in 1801. He was briefly apprenticed to a coach decorator in 1806, but left owing to the drunkenness of his master’s wife and joined a South Shields collier to become a sailor. In 1808 he was pressed into the Royal Navy, serving in the guardship HMS Namur at Sheerness. Discharged on health grounds in 1814, he then made a voyage to China in 1815 on the East Indiaman Warley and returned with many sketches. 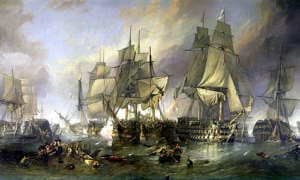 The Battle of Trafalgar, a painting by Clarkson Stanfield.

Following his career in the navy and travels, Clarkson Stanfield became a professional designer and painter of stage scenery. He worked at London theatres including the Royalty in Wellclose Square and the Coburg in Lambeth but it was at Drury Lane that he rose to fame.  Between 1823 and 1834 he became a resident scene-painter at the Drury Lane theatre, where he was noted for the huge quantity of spectacular scenery he produced. Stanfield abandoned scenery painting after 1834, although he would later make exceptions for two personal friends, William Charles Macready and Charles Dickens.

Stanfield was a personal friend of Dickens who worked with him on creating scenery for plays and illustrations for his works. As a result of their close ties, Dickens dedicated his novel Little Dorrit (first serialised between 1855 and 1857) to him.

Click here to view the Wikipedia entry for Clarkson Stanfield.