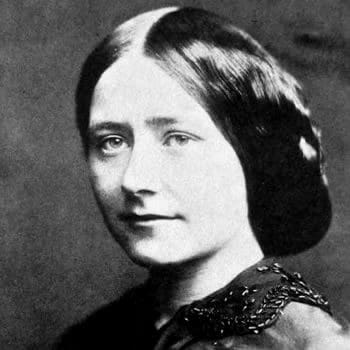 Ellen Lawless Ternan (1839 – 1914), also known as Nelly Ternan or Nelly Robinson, was an English actress who is mainly known as the mistress of Charles Dickens.

Ellen Lawless Ternan was born in Rochester, Kent on 3 March 1839. She was the third of four children, including a brother who died in infancy and a sister named Frances (later the second wife of Thomas Adolphus Trollope, the brother of Anthony Trollope). Her parents, Thomas Lawless Ternan and Frances Eleanor Ternan (née Jarman), were both actors of some distinction. Ternan made her stage debut in Sheffield at the age of three, and she and her two sisters were presented as “infant phenomena”. Ellen was considered the least theatrically gifted of the three sisters, but she worked extensively in the provinces, particularly after her father died in 1846.

In 1857, she was spotted by Dickens performing at London’s Haymarket Theatre. He cast Ellen, along with her mother and one of her sisters, in a performance of The Frozen Deep in at the Free Trade Hall in Manchester.

Dickens was forty-five when he met Ellen Ternan and she was eighteen, slightly older than his daughter Katey. Dickens began an affair with Ternan, but the relationship was kept secret from the general public. Dickens had become disillusioned with his wife Catherine, who he felt lacked his energy and intellect. Ternan, in contrast, was clever and charming, forceful of character, undomesticated, and interested in literature, the theatre, and politics. Dickens referred to Ternan as his “magic circle of one”. Matters came to a head in 1858 when Catherine Dickens opened a packet delivered by a London jeweller which contained a gold bracelet meant for Ternan with a note written by her husband. Charles and Catherine separated that May, after 22 years of marriage.

In September of that year Dickens installed Ternan in a house at 31 Berners Street. The address was close to where Dickens was living at the time, Tavistock House. Ellen was accompanied by her mother Francis, who was an actress, and two sisters, Maria and Fanny. After just a month Ellen and Maria reported to Charles that they were being pestered by a local policeman. Dickens complained but fear of publicity prevented him pursuing it. In March 1859, Dickens moved the Ternan’s to Ampthill Square, Camden.

Ellen Ternan left the stage in 1860, and was supported by Dickens from then on. She sometimes travelled with him, and Dickens was travelling with Ternan and her mother back from a visit to France when they were both involved in the Staplehurst rail crash on 9 June 1865.

Charles Dickens abandoned a plan to take Ellen Ternan on his visit to America in 1867 for fear that their relationship would be publicised by the American press. She lived in houses he rented under false names at Slough and later at Nunhead.

A number of people have speculated that Ternan may have had a son by Dickens who died in infancy (neither Dickens, Ternan, nor Ternan’s sisters left any account of the relationship, and most correspondence relevant to the relationship was destroyed).

Charles Dickens is thought by many scholars and commentators to have based several of his female characters on Ternan, including Estella in Great Expectations, Bella Wilfer in Our Mutual Friend and Helena Landless in The Mystery of Edwin Drood, and others may have been inspired by her, particularly Lucie Manette in A Tale of Two Cities.

When Charles Dickens died in 1870, he left a legacy of £1,000 to Ternan in his will and sufficient income from a trust fund to ensure that she would never have to work again.

In 1876, six years after Dickens’ death, Ellen Ternan married George Wharton Robinson, an Oxford graduate, who was twelve years her junior. She presented herself as 14 years younger (23 years old rather than 37). The couple had a son, Geoffrey, and a daughter, Gladys, and ran a boys’ school in Margate. Ternan’s husband died in 1910, and she spent her last years in Southsea with her sister Frances.

Ellen Ternan died of cancer in Fulham, London on 25 April 1914. She bore a family who never knew about her past while she was still alive.

Charles Dickens managed to largely keep his affair with Ellen Ternan secret during his lifetime.

Ellen Ternan hid her previous life with Dickens from her new family while she was still alive until papers discovered by her son after her death revealed her past.

The Dickens Fellowship and the surviving close family members of Charles Dickens maintained a facade of silence and denial about the affair from the time of Charles Dickens’ death in 1870 until the death, in December 1933, of his last surviving child, Henry Fielding Dickens.

In 2014, the film The Invisible Woman was released, telling the story of the secret affair Charles Dickens and Ellen Ternan. Directed by, and starring, Ralph Fiennes it is based on the book of the same name by Claire Tomalin.