Catherine Hogarth (1815 – 1879) was the daughter of a Scottish writer who would become the wife of the famous novelist Charles Dickens. Together they had ten children. 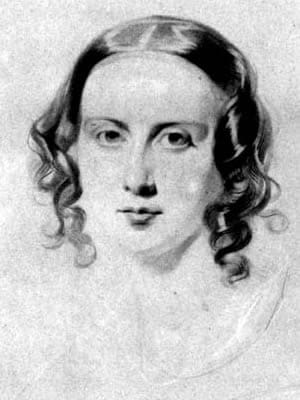 Born in Edinburgh in Scotland in 1815, Catherine came to England with her family in 1834. She was the eldest daughter of 10 children of George Hogarth, a journalist for the Edinburgh Courant, later becoming a writer and music critic for The Morning Chronicle where Dickens was a young journalist and later the editor of The Evening Chronicle.

They became engaged in the Spring of 1835 and were married on 2 April 1836 in Saint Luke’s Church, Chelsea and honeymooned in Chalk, near Chatham in Kent. They set up a home first at Dickens’s lodgings at Furnival’s Inn and after a year at Doughty Street in Bloomsbury, and went on to have ten children.

Catherine’s sister Mary Hogarth entered Dickens’s Doughty Street household to offer support to her newly married sister and brother-in-law. It was not unusual for the unwed sister of a new wife to live with and help a newly married couple. Dickens became very attached to Mary, and she died after a brief illness in his arms in 1837. She became a character in many of his books, and her death is fictionalised as the death of Little Nell in The Old Curiosity Shop.

Catherine’s younger sister, Georgina Hogarth, joined the Dickens family household in 1842 when Dickens and Catherine sailed to America, caring for the young family they had left behind.

In 1845 Charles Dickens produced the amateur theatrical Every Man in his Humour for the benefit of Leigh Hunt. In a subsequent performance, Catherine Dickens, who had a minor role, fell through a trap door injuring her ankle.

Soon after the birth of her ninth child Dora Annie Dickens in August 1850, Catherine suffered a nervous breakdown.  Charles sent her to Malvern to enjoy the spa waters and help her recover.  Whilst Catherine was staying in Malvern, Dora died suddenly and unexpectedly at the family home at Devonshire Terrace after suffering ‘convulsions’ on the evening 14 April 1851. On the day of her death  Catherine, was in Malvern and Charles Dickens had returned to give a speech. Charles Dickens did not immediately tell Catherine that Dora was dead, preferring to write a letter to her, delivered by John Forster, saying she was gravely ill. Catherine returned to London immediately after receiving the letter where she learned of her death.

In 1851, under the name of ‘Lady Maria Clutterbuck’, Catherine Dickens published a cookery book, ‘What Shall we Have for Dinner? Satisfactorily Answered by Numerous Bills of Fare for from Two to Eighteen Persons‘. It contained many suggested menus for meals of varying complexity together with a few recipes. It went through several editions until 1860.

Over the subsequent years, Charles Dickens found Catherine an increasingly incompetent mother and housekeeper and blamed her for the birth of their ten children, which caused him financial worries. Their separation in May 1858, after Catherine Dickens accidentally received a bracelet meant for Ellen Ternan, was much publicised and rumours of Dickens’ affairs were numerous, all of which he strenuously denied.

On her death in 1879, Catherine was buried next to to Dora.