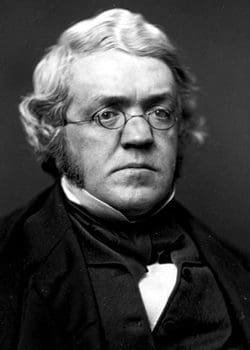 William Makepeace Thackeray (1811 – 1863) was an English novelist of the 19th century and friend of Charles Dickens. He was famous for his satirical works, particularly Vanity Fair, a panoramic portrait of English society.

Thackeray and Dickens were good friends and admirers of each other’s work, although Dickens with his phenomenal success was always one step ahead of Thackeray.

In July 1840, Dickens and Thackeray attend the public hanging of François Benjamin Courvoisier outside Newgate Prison. A crowd of around 40,000 witnessed the execution.

Dickens and Thackeray were both members of the Garrick Club. On going into the club one day Thackeray remarked that Dickens’s separation from Catherine was due to a liason with the actress Ellen Ternan, rather than with Georgina Hogarth. Dickens was infuriated and this almost puts an end to the Dickens-Thackeray friendship.

Edmund Yates, a friend of Dickens and a member of the Garrick Club, was a gossip columnist on the staff of “Town Talk.” He attacked Thackeray in ‘Town Talk‘; Thackeray mistakenly believed that Dickens had a hand in writing the article and demanded that Yates apologize or resign from the Club. Charles Dickens came to the defence of Yates although Thackeray prevails, and Yates is ‘black-balled’ from the Club. There is an end to the Dickens-Thackeray friendship.

In 1859 Edmund Yates publishes ‘Thackeray, Yates and the Garrick Club‘ in which he reprints all of the correspondence between himself, Thackeray and Dickens relative to the controversy.

In December 1863, Dickens’s daughter Kate brings about a reconciliation between her father and Thackeray only a few days before the latter’s death on Christmas Eve.