Thomas Carlyle (1795 – 1881) was a Scottish philosopher, satirical writer, essayist, historian and teacher during the Victorian Era. He was a close friend and inspiration for fellow writer Charles Dickens. 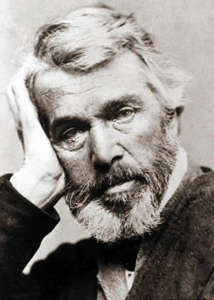 Photograph of Thomas Carlyle, believed to date from the 1860s.

Carlyle was born in Ecclefechan in Dumfriesshire, Scotland on 4 December 1795 . After attending the University of Edinburgh, Carlyle became a mathematics teacher.

Although raised a Christian, and initially set on a career in the clergy, he lost his faith while attending the University of Edinburgh between 1819 and 1821, an event which provided the material for Sartor Resartus (The Tailor Retailored), which first brought him to the public’s notice.

In 1831, the Carlyles moved to London, settling initially in lodgings at Kings Cross and in 1834, moving to 5 (now 24) Cheyne Row, Chelsea. This house has since been preserved as a museum to Carlyle’s memory. He became known as the “Sage of Chelsea”, and a member of a literary circle which included the essayists Leigh Hunt and John Stuart Mill.

Carlyle died on 5 February 1881 in London and was buried, accordingly to his wishes, beside his parents in his birth town of Ecclefechan.

In 1844 he is known to have attended a private reading by Charles Dickens of his new Christmas work, The Chimes at John Forster’s House.

Click here to view the Wikipedia entry for Thomas Carlyle.