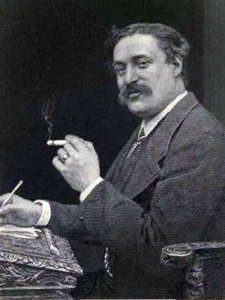 Photograph of Edmund Yates taken in 1865.

Edmund Yates (1831 – 1894) was a British novelist and dramatist and friend of Charles Dickens who publicly defended him during the Garrick Club affair.

Edmund Hodgson Yates was born in Edinburgh on 3 July 1831. He was the only child of the well-known actors Frederick Henry Yates (1797–1842) and Elizabeth Brunton Yates (1799–1860). His father was manager of the Adelphi Theatre from 1825 to 1842, so as child Edmund Yates lived in a private house over the theatre.

After finishing his education, Yates initially worked for the General Post Office but soon turned to fulfilling ambition of being a writer.

Yates worked as a journalist, mainly as a dramatic writer, and also wrote many dramatic pieces and some novels, including Running the Gauntlet and The Black Sheep.

Whilst attending the Garrick Theatre on 19 May 1894, Yates suffered a seizure. He died the following day at the Savoy Hotel, London.

Edmund Yates became a friend of Charles Dickens in the 1850s. Whereas many of Dickens’s literary friends had been introduced by mutual acquaintance it appears that Yates took upon himself his introduction to Dickens in 1854, turning up at his home at Tavistock House. Dickens, who admired his parents, the well-known actors Frederick and Elizabeth Yates, became close friends with Yates. Soon into their friendship, Dickens became godfather to the infant Charles Dickens Theodore Yates.

In 1858, Yates defended Dickens against what he termed the ‘lies’ being circulated about him in an article in Town Talk (19 June). The ‘lies’ were the rumours of Charles Dickens’s affair with the young actress Ellen Ternan. Dickens, in turn, backed Yates in the Garrick Club affair.

In 1859, Yates privately printed Mr. Thackeray, Mr. Yates, and the Garrick Club, an account of the notorious affair that led to the estrangement between Charles Dickens and William Makepeace Thackeray.