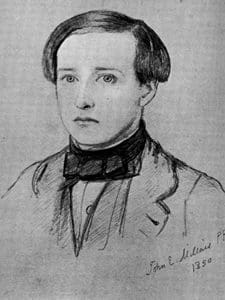 Charles Allston Collins (1828 – 1873) was a British painter, writer and illustrator. He was a friend of Charles Dickens and married to his daughter, Kate.

Collins was born in Hampstead, north London on 25 January 1828, the son of landscape and genre painter William Collins, and educated at Stonyhurst College in Lancashire.

His older brother was the novelist Wilkie Collins.

In the late 1850s, however, he abandoned art to follow his brother into a writing career.

Charles Allston Collins co-wrote a number of short works with Dickens. These included:

He later designed the cover for Dickens’ unfinished novel The Mystery of Edwin Drood.

He died from cancer in 1873 and was buried at Brompton Cemetery, London.

After his death, Kate married another artist, Charles Edward Perugini.