Henry Fielding Dickens (1849 – 1933) was the eighth of ten children born to English author Charles Dickens and his wife Catherine Hogarth. He would go on to be the most successful of all of Dickens’s children.

Henry Fielding Dickens was named after Henry Fielding, a favourite author of his father. He was educated at Wimbledon and at Boulogne-sur-Mer and entered Trinity Hall, Cambridge, in 1868. He graduated in mathematics and subsequently studied law. 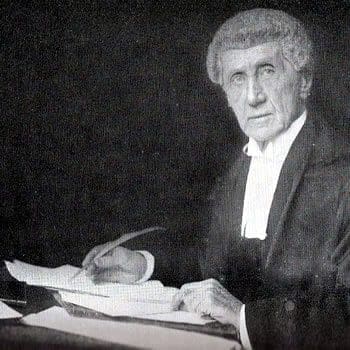 Henry Fielding Dickens, photographed in his role as Common Serjaent at the Old Bailey.

In 1873 he was called to the bar. He married Marie Roche (1852-1940) in 1876 and they had seven children. In 1892 he was appointed Queen’s Counsel. He became a Bencher of the Inner Temple in 1899. In 1902 he defended Kitty Byron who stood trial for the murder of her lover. She was convicted but his defense caused a public petition that resulted in a reduced sentence.

In 1917 Henry Fielding Dickens became Common Serjaent at the Old Bailey in London, judging trials until his retirement in 1932.

Henry Fielding Dickens died at St. Luke’s Hospital, Chelsea on 21 December 1933. It was five days after he had been hit by a motorcycle while crossing Chelsea Embankment at his usual place and by his usual method of warning motorists by holding up his walking stick and stepping out into the road. He was the last surviving child of Charles Dickens.

A private funeral service was held for Henry Fielding Dickens at Putney Vale Cemetery on Saturday, 23 December 1933. Among his descendents are the authors Monica Dickens and Lucinda Hawksley and the actor Gerald Dickens.

Click here to read the obituary of Henry Fielding Dickens, published in The Times, on 22 December, 1933.