Francis Jeffrey Dickens (1844 – 1886) was the third son and fifth of the ten children of Victorian English novelist Charles Dickens and his wife Catherine. 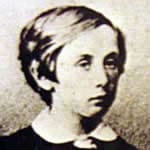 Image of Francis Dickens as a child.

He was born in England on 15 January 1844 and went to school in Germany to train to become a doctor. Giving up this ambition, he obtained a commission in the Bengal Mounted Police and served in India for seven years.

Following his father’s death in 1870 he inherited some money, but he soon went through this, and his aunt, Georgina Hogarth (Catherine Dickens’ sister) used her influence with family friend Lord Dufferin, then Governor General of Canada, to get Francis Dickens a commission in the North-West Mounted Police.

Dickens joined the North-West Mounted Police as a Sub Inspector in Canada in 1874 shortly after the March West which brought the original police force of 250 members to the modern provinces of Saskatchewan and Alberta. He would remain in the force 12 years, serving at Fort Walsh, Fort Macleod and Fort Pitt, getting promoted to Inspector in 1880.

During the North West Rebellion of 1885, Francis Dickens was in charge of the defence of Fort Pitt on the North Saskatchewan River.

Following his discharge from the Mounted Police in 1886 (for reasons of ill health—he was becoming increasingly hard of hearing among other infirmities) Frank was going to embark on a series of lecture talks in the US (as his father has successfully done), but died of a heart attack at a friend’s house in Moline, Illinois the night of his first speech, 11 June 1886, at the age of 42.

Click here to view the Wikipedia entry for Francis Dickens.