Charles Culliford Boz Dickens, or Charles Dickens Jr.,  (1837 – 1896), was the first of the ten children from the marriage of English novelist Charles Dickens and his wife Catherine Hogarth. A failed businessman, he became the editor of his father’s magazine All the Year Round, and a successful writer of dictionaries. He is now most remembered for his two 1879 books Dickens’s Dictionary of London and Dickens’s Dictionary of the Thames.

Charles Dickens, Jr. was born on 6 January, at Furnival’s Inn, Holborn, London. His godfather was Thomas Beard, one of Dickens’s oldest friends who he had met as a fellow journalist at The Morning Chronicle newspaper. He was nicknamed ‘Charley‘ by family and friends. 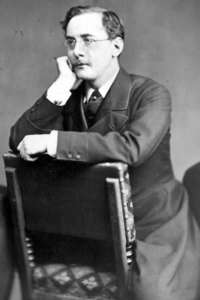 In 1847, aged 10, Charles Dickens, Jr. entered the junior department of King’s College, London but was soon withdrawn after an outbreak of scarlet fever. He went on to study at Eton College and, in 1853, visited Leipzig to learn German.

In 1858, after the separation of his parents Charles Dickens and Catherine, with his father’s agreement, he went to live with his mother.

As a young man, Dickens showed skills that could have led to a career in journalism but his father encouraged him to go into business. With ambitions to become a tea merchant, he visited China, Hong Kong and Japan in 1860.

In 1868, after the failure of his printing business, and bankruptcy, he was hired by his father to work at All the Year Round and was appointed sub-editor the following year. In 1870, after his father’s death, Dickens, Jr. inherited the magazine and became its editor. At this time he also bought at auction Gads Hill Place, his father’s Kent home, but he was forced to give it up in 1879.

1836 A second volume of the first series of Sketches by Boz is published by the publisher John Macrone. The first volume had been published six months earlier.
1840 At a low-key ceremony in London's Trafalgar Square, the foundation stone for Nelson's Column is laid.
1865 Death of the Italian poet and scholar Samuel David Luzzatto (born in 1800).